We have listed a number of Frequently Asked Questions in a wide range of topics. If you have any questions that we haven’t answered, please send us an email or give us a call.

Do I need to be certified in DiSC to administer or train with Everything DiSC or Other DISC assessments.

No, you do not need to be certified to administer, use, or train with DiSC profiles. However, we do offer DiSC Certification for those that are interested:

A part of the beauty of the Everything DiSC and DiSC Classic Profiles and facilitation materials is that they are easy to understand, use, and implement. A lot of time, research and money have been invested in these materials in order to focus on the results, learnings and feedback they provide, opposed to getting stuck in models and language that mystify rather than clarify. Our facilitation materials are designed in a user-friendly, experiential-learning format designed to be used by people with all levels of training experience. They will guide you through how to interpret and conduct complete training with our profiles.

Are there courses that I can take to learn more about DiSC, but doesn't involve Certification?

We now offer a course called Everything DiSC Essentials. Think of this course as a ‘bite-size’ learning opportunity. It is designed to take around 4-hours to complete and is perfect for a Manager, Team Leader, or HR Administrator who should know enough about DiSC to stay ‘dangerous’, but who isn’t actively teaching DiSC in the classroom.

Is there a difference between the certification options?

Once you complete certification in either Lancaster, Minneapolis, or Online you will receive a badge and certificate of ‘Everything DiSC Certified Trainer’.

In our Lancaster, PA DiSC Certification offering, we provide additional materials that we have developed over the last 30 years of facilitating DiSC. We are happy to provide those materials to participants that take the Online or Minneapolis certification options.

How long does it take to complete the DiSC Test

All versions of DiSC that are published by Wiley take around 15 to 20 minutes. However, the Everything DiSC assessments can take a shorter amount of time because they use a more advanced testing method called Adaptive Testing. Everything DiSC products can take as little as 10 minutes to complete depending on how strong of a person’s inclination is with their behavioral style.

Can my DiSC profile change over time?

In general, a person’s profile tends to stay fairly consistent over time. While you may find small differences in your results from one time taking the assessment to the next, you’re unlikely to experience major shifts in style.

Everything DiSC has been researched for both validity and reliability. If it has been two years or more since you last took the profile, we recommend taking it again to ensure the most accurate and up-to-date information.

The lowercase “i” in DiSC® is a Wiley trademark and which allows you to determine if you are using a DiSC Product that is published by Wiley.

Legend has it that it was originally a printing error, although some in the know have said it was done on purpose very early on to put a particular “I” style person in their place. Either way, Performax (later Carlson Learning Company, Inscape Publishing, and now Wiley) decided to copyright and brand their version of DISC using the small “i” distinguishing it from other DISC based assessments.

Who Created the DiSC Model?

The DiSC model was originally based on the 1928 work of Dr. William Moulton Marston at Columbia University.

The four quadrant behavioral model was developed to examine the behavior of individuals within their environmentally specific situation. DiSC looks at behavioral styles and behavioral preferences. It was Marston’s 1928 book, “The Emotions of Normal People,” which introduced the DiSC model to the public. Marston, a contemporary of Carl Jung, defined four categories of human behavior style, type, or temperament which are Dominance, Influence (Inducement), Stability (Submission) and Compliant, Conscientious or Caution. Marston used compliance.

Even though Marston developed the D.I.S.C. model, the DISC test or DISC assessment, to prove his theory of the emotions of people within their environment, he never copyrighted his test. Thus DISC is available in the public domain.

Later, the work of Marston was researched and updated by Dr. John Geier and Inscape Publishing at the University of Minnesota. The DiSC model and its complimentary assessment tools have helped over 50 million people in 20+ languages over the last 40 years.

As an added bit of trivia, Marston is known in many circles for his work in developing the lie detector test. He was also the creator, writer and producer of “Wonder Woman” which introduced into comic strips, the role model of a strong female.

Is there a average distribution of DiSC Styles?

The Everything DiSC model has shown that the four primary styles breakout to each represent around a quarter of the population. Below is an excerpt from that research which shows the exact distribution by all 12 styles: 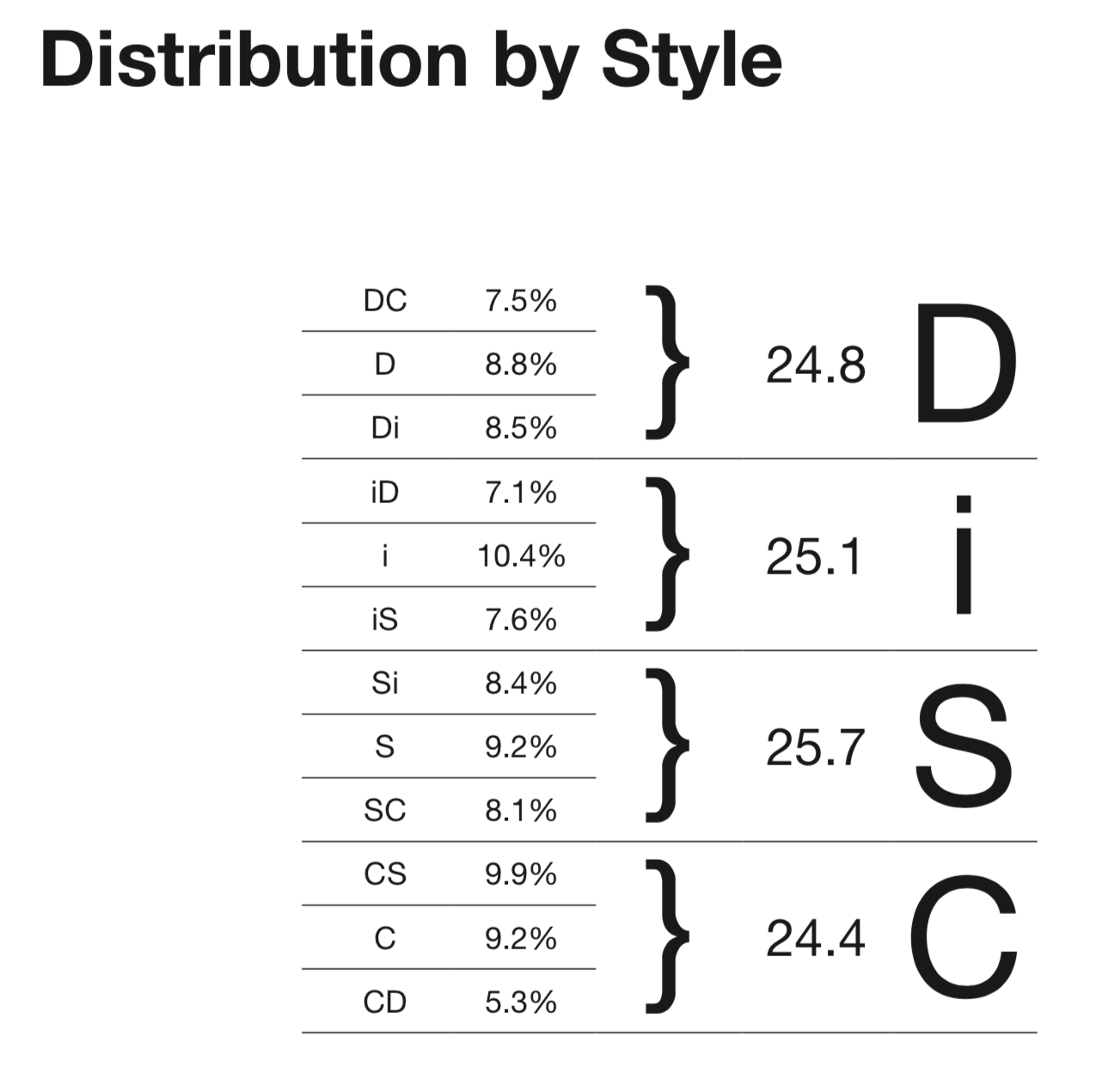 Is there a correlation between gender, race and DiSC Styles?

The distance that a respondent’s dot is located from the center of the circle is known as inclination (in the past we used the term “High D” or “High i” to communicate the strength of a person’s inclination).

People with stronger inclinations are expected to have more pronounced DiSC styles. The publisher of DiSC conducted an analysis and found that Caucasians were significantly more likely to have stronger inclinations than other groups. However, the effect sizes suggest that the relationship between race and inclination showed little practical importance.

In the same study, researchers compared men and women and found that the difference in their inclination (Style Strength) was less than 1% variance.

For those interested in learning more about the research of DiSC, we strongly suggest purchasing and reading the DiSC Manual.

Do I need to be certified to administer the DiSC profiles?

Unlike MBTI, you do not need to be certified to conduct a DiSC Workshop. DiSC is designed to be simple and easy to understand, and the facilitation materials were created to be taught by anyone. Many of our clients have purchased a facilitation kit and have conducted successful workshops without becoming DiSC Certified.

DiSC Certification was created as a way for trainers to learn more about the research behind the newest model of DiSC. Trainers that take certification will primarily gain a deeper understanding of the model along with some training on conducting a workshop. For those that are interested in becoming certified, we offer both an In-Person and Online certification course.

EPIC is a online administrative platform for DiSC, and other legacy John Wiley & Sons products. EPIC is an acronym for Electronic Profile Information Center. Organizations with an EPIC account have full access and control over the creation and storage of their profiles.

We offer EPIC starter packages for those interested in becoming the administrator for their organization’s DiSC profiles.

Are there tutorials on how to use an EPIC account?

The Center for Internal Change, a Division of The TEAM Approach, conducts monthly EPIC 101 Webinars which are free to join.

Our organization is always excited to help our clients learn how to use their EPIC account more effectively. Feel free to call us directly for any immediate questions or concerns: (847) 259-0005

What is the difference between DiSC Classic and Everything DiSC

Everything DiSC is the 3rd generation of the DiSC Profile published by Wiley. This report features the circular model (circumplex) which is most aligned with the original model designed by Marston. This product is only available online, and includes access to MyEverythingDiSC.

Which assessment should I use for part of the hiring process?

While the publisher has conducted extensive research regarding the validity of DiSC; it is important to note that DiSC is not validated for hiring, and the publisher doesn’t encourage the use of DiSC in hiring. For this reason, we suggest our clients evaluate the PXT Select Assessment to be used as a selection assessment.

For those that want to use DiSC to conduct behavioral interviews, we suggest using the Everything DiSC Workplace report to ensure they are receiving the most accurate results. Read our best practices when using DiSC for Hiring.

Is DiSC available in languages other than English?

Yes! Language availability varies based on the specific DiSC product. Please call or email us and let us know which report and language you are looking for, and we will tell you if it is available.

Facebook-f Linkedin-in Shopping-cart
We use cookies to ensure that we give you the best experience on our website. If you continue to use this site, we will assume that you are happy with it.OkPrivacy Policy