Tony Robbins DISC: Compare it to Everything DiSC

How does Everything DiSC compare to Tony Robbins' DISC Test? Read our evaluation and comparison of both tools. 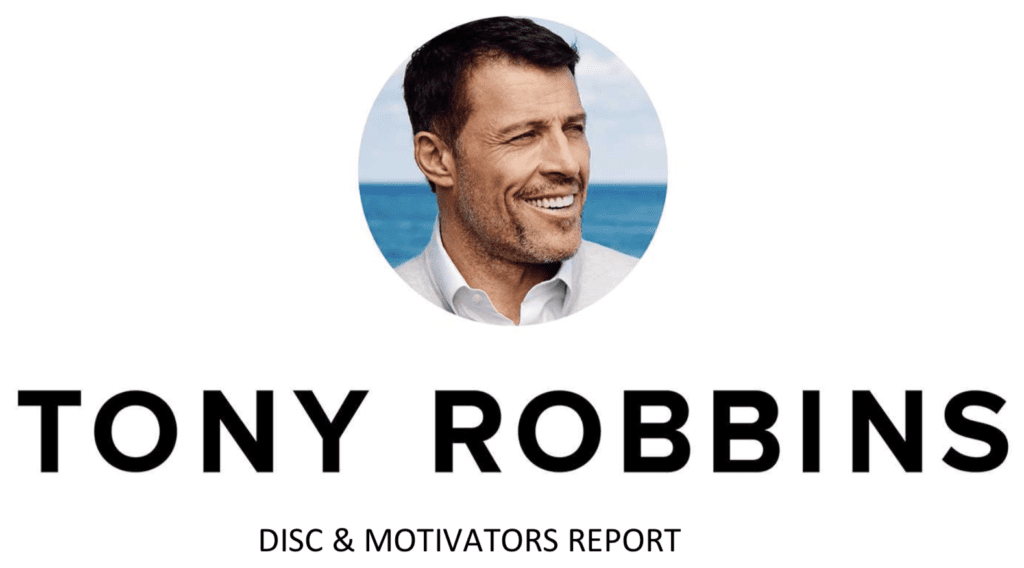 Tony Robbins is one of the most known self-help gurus. Through his work, many businesses leaders and individuals have learned about DISC. He has promoted DISC as a way to help anyone grow their career.

So, we had to find out for ourselves how Tony Robbins’ DISC Test compares to the leading DISC-based assessment, Everything DiSC®.

It’s important to state that Tony Robbins offers a free DISC profile. For the price of your email address, you can receive a DISC report. Users will need to pay at least $59 dollars for the full report, but anyone can learn their DISC style for free. You might ask, why would you spend any money if you could get something for free? The answer we found is in the time spent learning versus the results.

This article details why Everything DiSC Workplace is worth your investment (even compared to a free DISC Profile). If your team or organization is looking to enact real cultural change and improvements in communication and relationships. In this article, we will cover:

You might first wonder why there are multiple versions of DISC at all.

The theory of DISC was formulated in the 1920s by William Moulton Marston. However, Marston never created a DISC assessment. It wouldn’t be until the 1970s that the first DISC assessment was created to measure a person’s behavior. A researcher, named John Geir at the University of Minnesota, took Marston’s theory and used it as a basis for his behavioral assessment.

Geir’s original DiSC test (with the small ‘i’) would eventually become Everything DiSC and is now published by John Wiley & Sons.

Both Tony Robins DISC report and Everything DiSC use Marston’s theory to help a person identify their DISC Style. However, each report approaches how this information is portrayed differently. Tony Robbins DISC shows an individual their style based on a bar graph. By comparison, Everything DiSC shows a person their style on a circle graph: 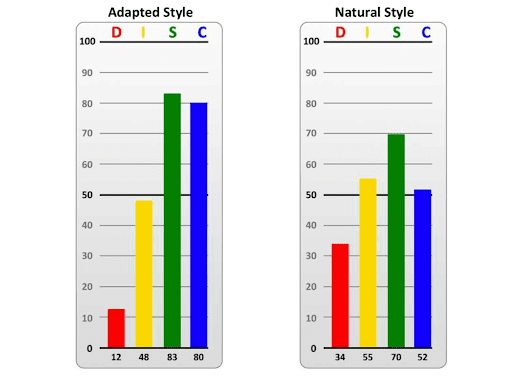 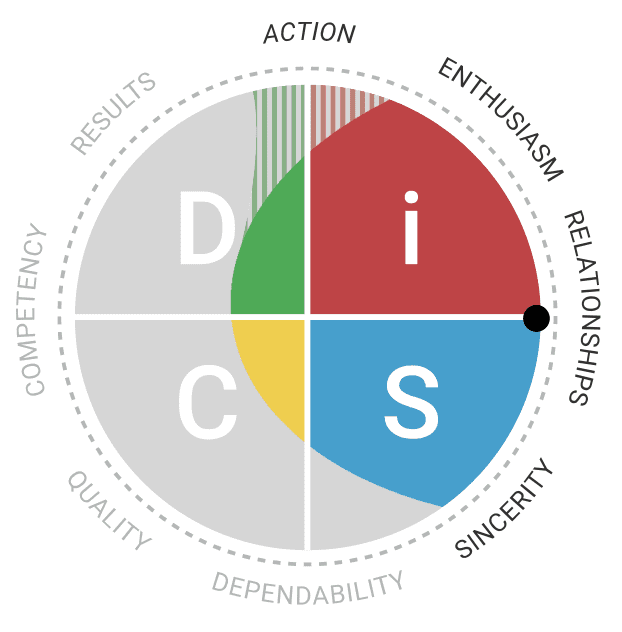 Everything DiSC shows a person their DiSC Style as a dot on a circle graph:

If both tests use Marston’s DISC theory to help someone understand their personality, how can one test show someone’s style as a bar graph and another one as a dot on a graph?

The answer (and misunderstanding) lies in the history of DISC.

Graph I was considered a person’s Public Self (Adapted Style). Graph II was thought to be a person’s Natural Self (Natural Style). Geir’s test had a third graph called Graph III. This graph was a combination of Graph I and II, and it showed a person’s ‘Overall DiSC Style‘.

The common interpretation was that, when using a DISC model that includes two bar graphs or two line graphs, Graph I showed the world who we wanted to be, and Graph II was who we actually were (potentially because it showed our less desirable characteristics). 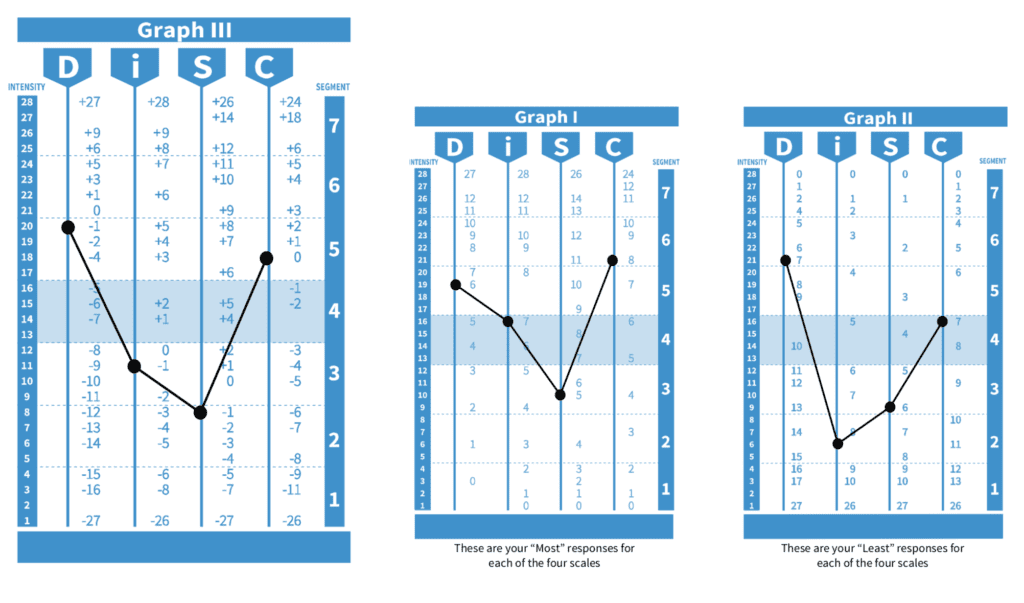 Geier’s company went through a number of names and ownerships, and it is now owned by John Wiley & Sons (the publisher of Everything DiSC).

In 2009, Wiley moved away from the 2-graph model entirely. As they made this transition, Wiley wanted to determine if there was any validity to the 2-graph model and if we had two distinct personalities. To better understand the two graphs, Wiley conducted two separate studies to understand if this interpretation was valid.

In both studies, they asked participants to complete a DiSC Classic 2.0 assessment which provided a person with a standard line-graph DISC Style which is similar to what is used on Tony Robbins DISC assessment. Then, the participants responded to a series of 20 adjectives and rate how much those adjectives describe themselves.

In the first study, participants were asked to rate themselves based on how they felt others saw them. These results were compared to Graph I on their DiSC Classic 2.0 report.

If Graph I was our public self, the self-assigned adjectives should match the same adjectives on their DiSC Classic Graph I report.

The opposite, however, was found. The words didn’t match at all.

In the second study, the respondents were asked to recall a recent time when they were under a lot of stress and pressure at work. They were asked to rate how well the list of adjectives described them in those moments.

This part of the study measured to see what we believed our ‘true’ or natural self when we are under pressure.

Again, the participants’ self-rated adjectives didn’t match with their DiSC Classic 2.0 Graph II scale scores. Based on this study, DiSC Theory doesn’t support that we have ‘two identities’ that are determined by a particular situation.

So, what does this all mean?

Ultimately, the two graphs portion of Tony Robbin’s report doesn’t represent an accurate interpretation of DISC theory. There aren’t two individuals inside of us. As much as that idea can make sense there isn’t any conclusive evidence to back it.

When taking both Everything DiSC Workplace and Tony Robbins’ test, a learner should receive the same overall DISC Style. However, Everything DiSC focuses on helping a person understand and learn their singular DiSC Style and the graph represents this approach.

When Marston wrote the book titled Emotions of Normal People and created DISC Theory, he described people as a color wheel. He imagined that while we have a primary color that others can identify us as we still have a multitude of colors that make our primary color.

Everything DiSC’s circular graph moved away from the classic graph model to more closely realize Marston’s color-wheel imagery. The Everything DiSC graph is more descriptive and easier to understand at a glance. 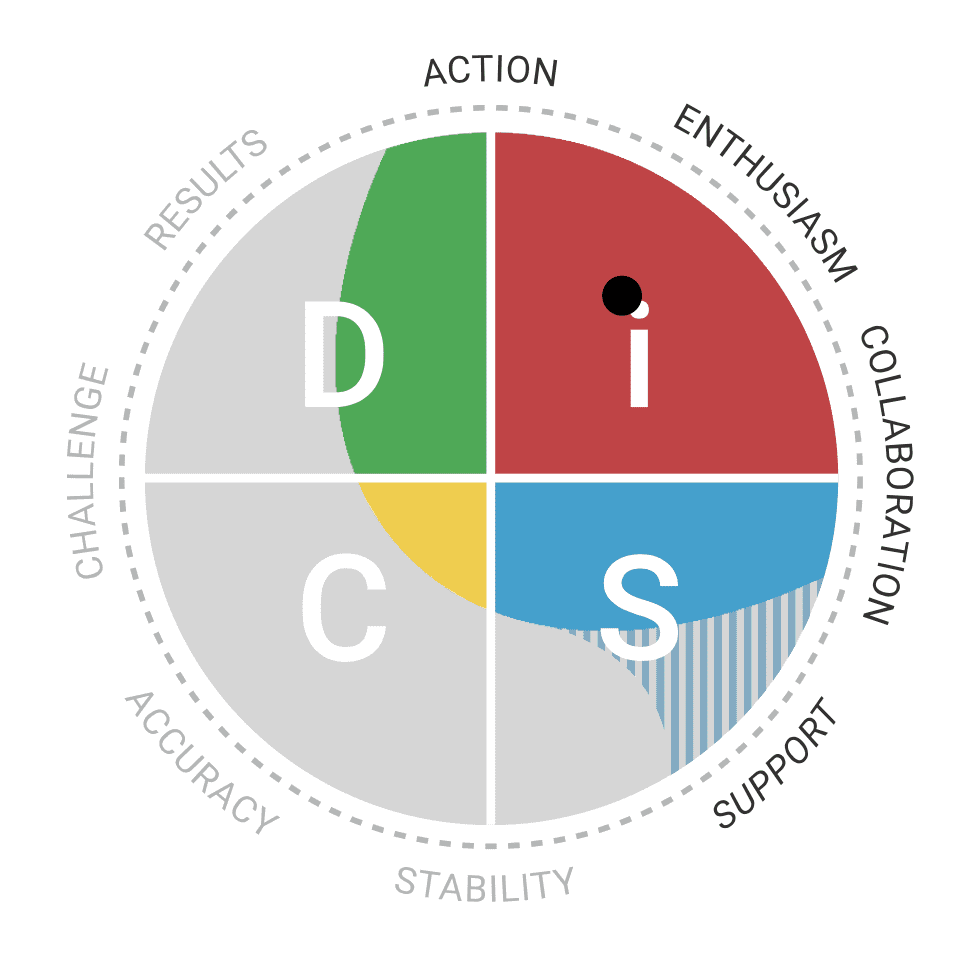 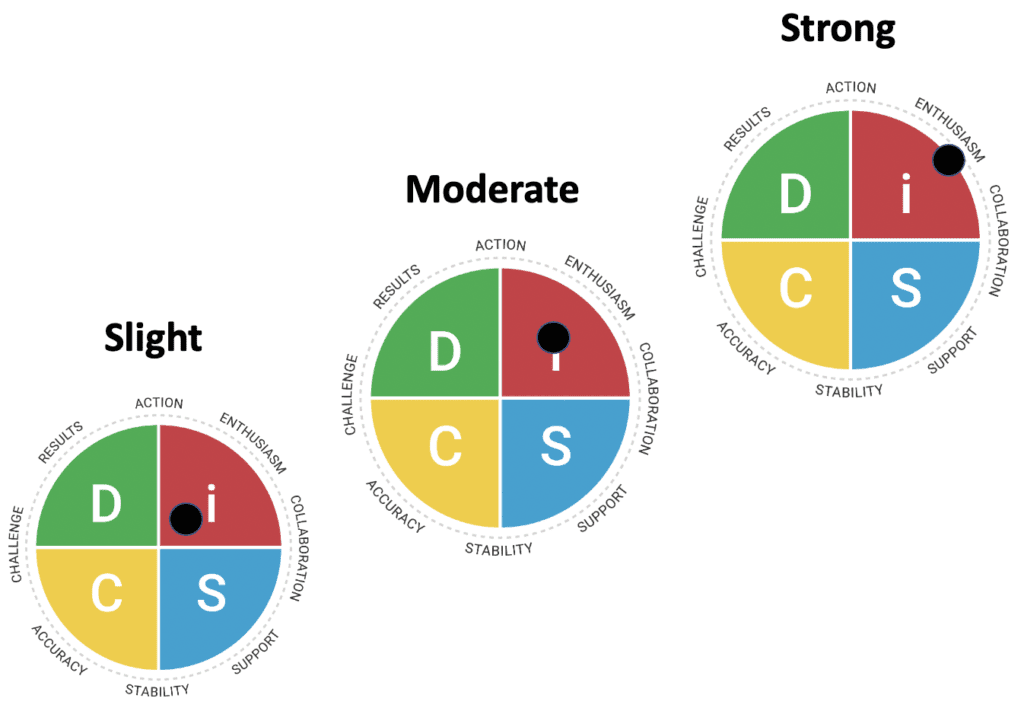 When a person receives their DiSC style, it’s shown as a black dot on the map. The location of the dot matters. Someone who has a dot on the outer edge of the map is more aligned with their style than someone who has a dot closer to the center. Essentially, it’s easier for someone with a dot closer to the center to mirror or use the behaviors of other styles.

Additionally, the Everything DiSC Map shows words around the map’s edge. These words are priorities. A person might receive an extra priority in addition to their DiSC Style.

This allows for a person to have both an i-Style and the priority of Accuracy which is more aligned with the C-Style. Everything DiSC measures a person based on 8 DiSC scales, and this measurement results in 32% more accurate and personalized results.

What separates consistently successful people from everyone else? Self-awareness.

Tony Robbins writes how DISC can help any individual become more self-aware and how that trait can fuel success:

Self-awareness is essential to success. If you don’t understand what drives your actions and behaviors, it’s difficult to cultivate positive growth.

As you discover what inspires you, you’ll identify what may hold you back from success, as well as the traits, habits, and behaviors that propel you forward. When you take the DISC assessment, you will learn how to leverage the various aspects of your personality for a life of achievement that aligns with your personal values.

Tony Robbins free report is very informative. However, much of the information is standardized.

Someone could take the report multiple times, and they would receive 90% of the same information each time they received a completed report. While that’s not to say the standardized information is incorrect or unhelpful, it’s just not personalized to the individual who took the test.

A common concept for helping anyone retain new information is to connect the information to something familiar. Steve Penfold from eLearning Industry writes, “When we are learning, the brain tries to link neurons together. If your learning content can hook onto something that people already know, it helps the brain form those links.”

The most powerful experience during a DISC workshop or coaching session is when an individual reads about their personal DISC Style story. Often, individuals can’t believe how accurate the results describe them.

Everything DiSC capitalizes on this immediate connection. It carries those insights into other sections so strategies for using DiSC to communicate have a better chance of actually being learned. Rather than just give standardized information on how anyone can connect better with a person who has a D-Style, Everything DiSC will personalize the insights to a person’s particular DiSC Style.

The Tony Robbins report doesn’t go this route. In fact, it can be confusing how the information relates to anyone as an individual. If someone has a D-Style, the way they need to adapt to meet another behavioral style is going to be different from, say, someone with an S-style. This personalized strategy is missing from the Tony Robins profile, but it is included in the Everything DiSC Workplace on Catalyst report.

Everything DiSC personalizes new insights frequently. When discussing other styles, Everything DiSC Catalyst will identify other individuals on that person’s team. When a person with an S-Style is learning more about the D-Stlye, they can quickly see who in their team or organization has that particular style. This linking will help a learner categorize and internalize the new information. Additionally, because an individual’s results are shown on an online platform, Everything DiSC is able to use video, podcasts, and interactive elements to bring the content to life.

Using multiple mediums to explore new content is another way that learners are able to retain new information.

Everything DiSC learners will have access to videos, podcasts, and interactive elements when they receive a report on Catalyst.

While you might be reading this article because you are focused on finding a DISC tool to fit your needs, Everything DiSC Catalyst also offers content to help improve emotional intelligence.

Explore Everything DiSC on Catalyst

Everything DiSC was designed to be used specifically in training that matches the application that is helping to teach.

With this report, learners can go through a standardized training that brings their reports to life. The training materials are available for organizations to use on their own. The power of these materials is that it gets individuals and teams to practice using DiSC.

After all, a theory is only as useful when it is applied.

The assessment is published by Assessments 24×7. Tony Robbins’ DiSC test also includes the Motivators assessment which is based off the research of Dr. Eduard Spranger and Gordon Allport. While these two assessments will help a person identify their behavioral styles, an assessment alone won’t help us in how we approach our work or relationships.

Schedule an Everything DiSC Training 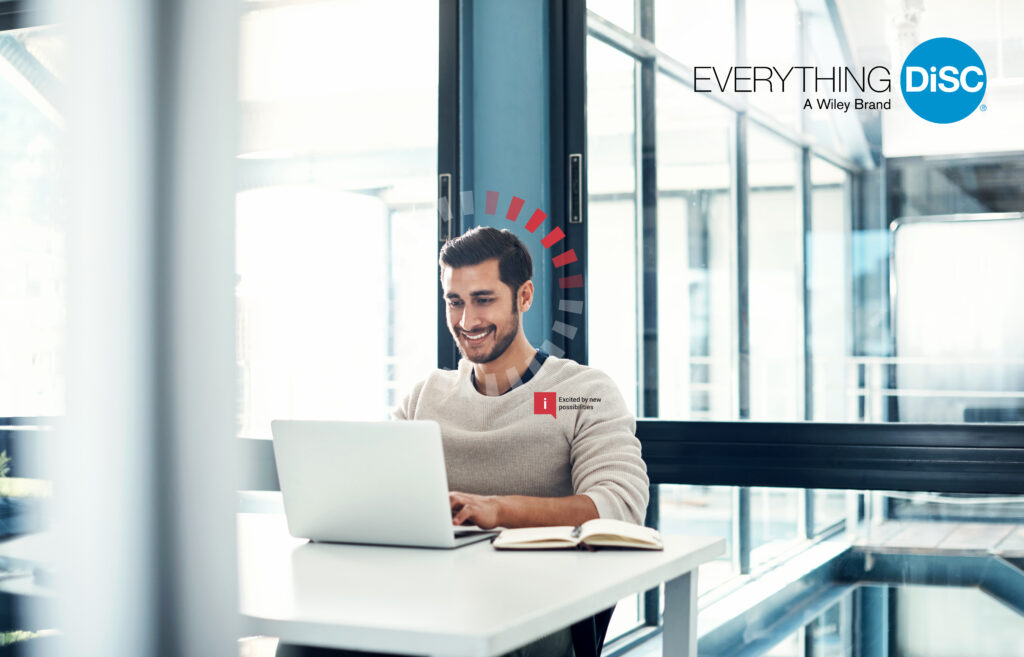 Purchase the Everything DiSC Training Kit 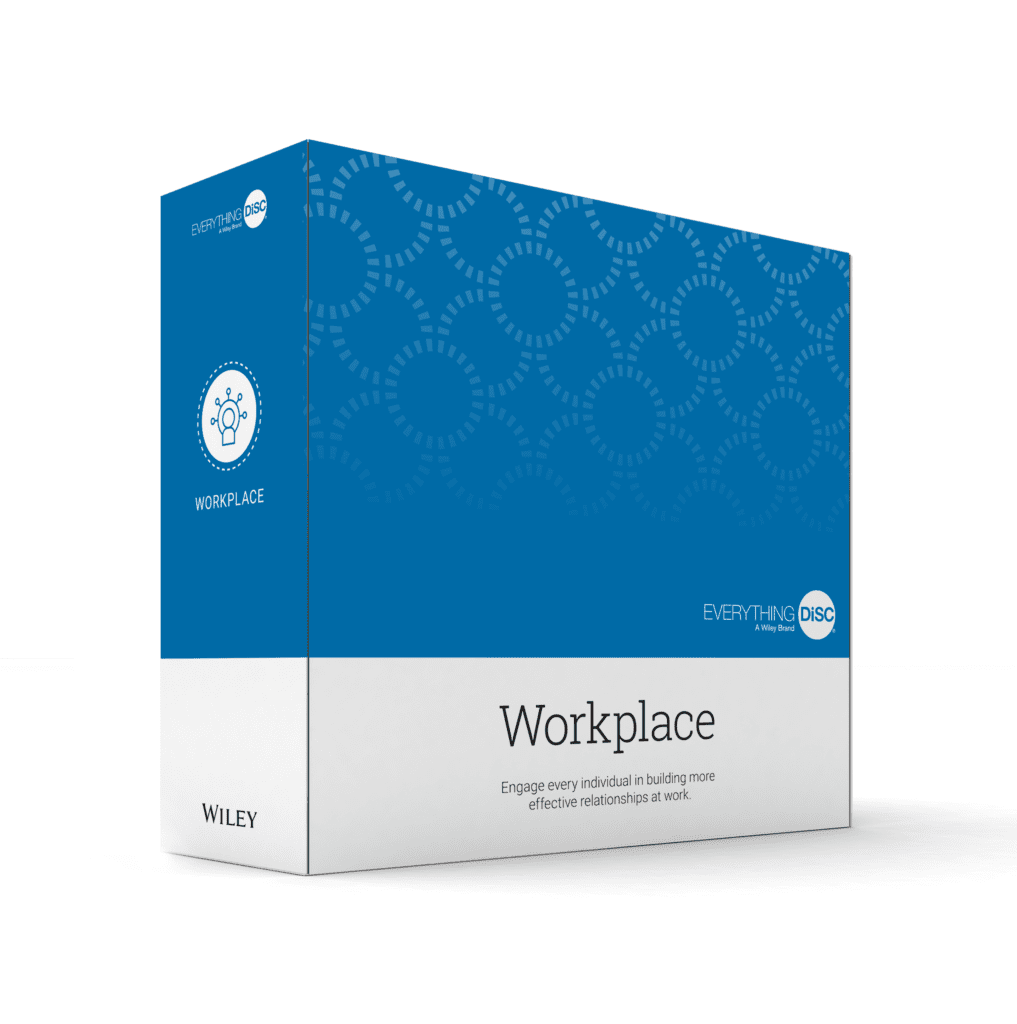 PrevPreviousWe are in a hiring crisis. Here are a few ideas to overcome it.
NextDot Day 2021Next